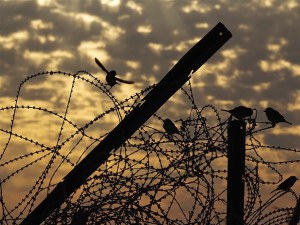 Imprisoned anarchist Toby Shone has refused to attend any more workshops run by right-wing Senior Officer Steven Sollars at HMP Bristol due to the constant provocations, insults, denigration and threats. He was confined to his cell for 23 hours a day for two weeks following his refusal.

Ex-military and a screw at Bristol prison for the last 11 years, SO Steve Sollars is well known amongst prisoners as a politically motivated bully and bigot. He boasted to prisoners that he was part of a counter-protest that “protected” the cenotaph in June 2020 during the Black Lives Matter protests in Bristol. He gloated about the long sentences given to Kill the Bill protestors, particularly Ryan Roberts.

He publically fantasised about re-introducing chain gangs, saying that he would shoot prisoners in the face with a shotgun if they rebelled.

Sollars threatened to kill Toby and blame it on another prisoner. He made derogatory remarks about Irish rebels in the run up to the Bloody Sunday remembrance on January 30th (Toby is of Irish descent) and he has made racist comments to Muslim prisoners. Having googled his case, Sollars has made it his mission to make things difficult for Toby who he has subjected to significant verbal abuse, including taunting him about his MRI scan for cancer whilst he was waiting for the results.

Following Toby’s refusal to attend any more workshops with him in early February, SO Sollars has – as he had previously threatened to do – made a false intelligence report stating that Toby threatened to assault him which will go on Toby’s record and for which there is no fair process.

He has ensured through his colleagues in the Correspondence Department that Toby is not receiving his books or mail (including legal correspondence) in an effort to isolate and demoralise him, and interfere with his legal process. Sollars also threatened to make sure Toby got an ‘unfavourable transfer’ to an even worse prison and to make sure that his application for early release (HDC – electronic tag), which he is due to apply for in June, will be refused.

It is to be expected that screws behave in this way, but we will not let it pass.

We are asking people to bombard the prison with mail for Toby. A postcard will do. Remember to put a return name and address on the back, and if you can afford to, please send it Royal Mail Signed For so that you can see it has been delivered via the tracking number. Toby replies to every letter he is sent. If you do not get a reply, he hasn’t received your mail.